Posted by Sam Eskenazi on July 17, 2013
Posted in: Uncategorized. Leave a comment

Hrolf decided to sail to Ireland first, to crush those Irish Catholic scum. 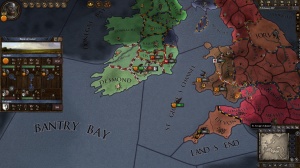 An easy battle passed; the pitiful Irish forces were torn asunder easily enough, leaving Hrolf to raid as he pleased!

Whilst looting, one of the many women in his entourage clamoured for Hrolf’s affections… How could he resist? He was an aspiring Viking after all!

Whilst further looting, Hrolf’s chancellor (the supposed heir, until Hrolf has sired his own heir) has apparently plotted to kill him! Such evilness will not be tolerated!

This will not do! Off to the jailhouse, Hrolf decrees!

On to more important things, whilst raiding the wealthy hills of Dyfed, Hrolf’s reputation as a fearsome Viking raider was cemented in the stories of his men; all who knew him thought of him as a great and fierce raider! Hrolf’s father, and indeed the Gods, would be proud.

Sadly, living in these evil heathen lands has cursed Hrolf with an affliction! 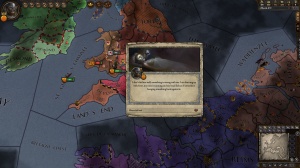 Of course, the great and mighty Hrolf was healed of his illness in no time at all; the Gods were never going to let their favourite Viking raider be laid asunder by some petty Christian illness!

Hrolf was so busy raiding he had completely forgotten to pay attention to the lands of Holland. The old Norse-betrayer, the Duke of Holland, has lost his lands!

Evidently, the abominable Christian King of Lothargianiaianiaani-something-something revoked it from him, and gave it to a sickening priest, giving a man of their White God far too much power for any true Norseman to stand.

Thus, Hrolf has made a resolution. He will take the dukedom of Holland for himself; it is clearly the only logical conclusion. He will leave his namesake lands till later; this is for the Gods.