Hrolf could not believe himself.

He was a Count. A leader of men. Someone to whom people expected to lead.

And somehow, there were people arriving from all over with just that in mind.

Numerous great leaders of Norsemen, ready to fight for him.  Small bands of men arrived from all over, weapons at the ready, all bending the knee to Hrolf, every single one of them attesting to a dream they had, wherein a one-eyed man in a cowl spoke to them and urged them to come and fight for Hrolf de Normandie.

Of all the men that joined Hrolf, 3 stood out as powerful warriors renowned for their military prowess.

Ragnaar af Hoorn was one. Fabled as a man with a harsh temper, and one who greatly hated all those worshipers of the White God. Tales speak of his losing his entire family to so called “noble knights”. Hrolf had to admit, his name was especially fantastic; “Ragnaar”. Almost like a monster of the deep. Hrolf made a mental note to keep an eye on him, and ensure that this “Monster of the Deep” lead some of his armies.

Arnbjorn af Hoorn was another. A great leader of men, one who inspired great courage in others. Reputed to be humble towards those he served, but Hrolf’s courtier’s whispered to beware of his macinations, as he often plotted against those her served. Hrolf thought that those two qualities were somewhat conflicting to him… He was a distant relation to Ragnaar and thus shared in his hatred of the White Gods. The two maintained an long-running feud.

Sæmundr af Egmund was the last. Persistently plagued by paranoia, he was known as being highly aggressive in combat, yet arbitrary and distant in his dealings with others. A man truly only fit for combat; Hrolf ensured that he would get his share of blood to keep him appeased. 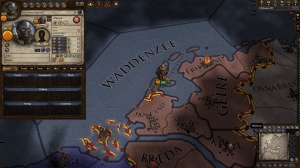 Bit of a silly man, really…

It was important to populate the council, and thus Hrolf had to decide who to appoint!

Putting the fabled Ragnaar as Marshal, Hrolf’s armies were sure to be ever aware of their leaders’s might. The other positions he filled rather indiscriminately; who is he to care about scheming or money making? He is a Viking! He will make his money through taking it from others! 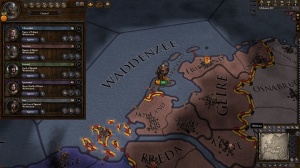 Such a grand force!

All this completed, Hrolf needed to decide what he wanted to do with his new found power. In only the space of a short month, he was granted huge amounts of true power; he decided to do what a Viking does best! RAID. He has taken it upon himself to gain as much wealth as possible. He will raid until his ships are full and his coffers overflowing!

He assembled his armies.

He knew the importance of assigning proper people in charge of flanks, as he had prior experience serving as the Marshal of Holland. He put his generals in charge of respective flanks that he thought they would deal with best. Here’s hoping they don’t get themselves killed!  Except for Arnbjorn… Hrolf didn’t lack that one so much…

He was going raiding.